What does it mean to be Irish? Who can lay claim to Irish identity? 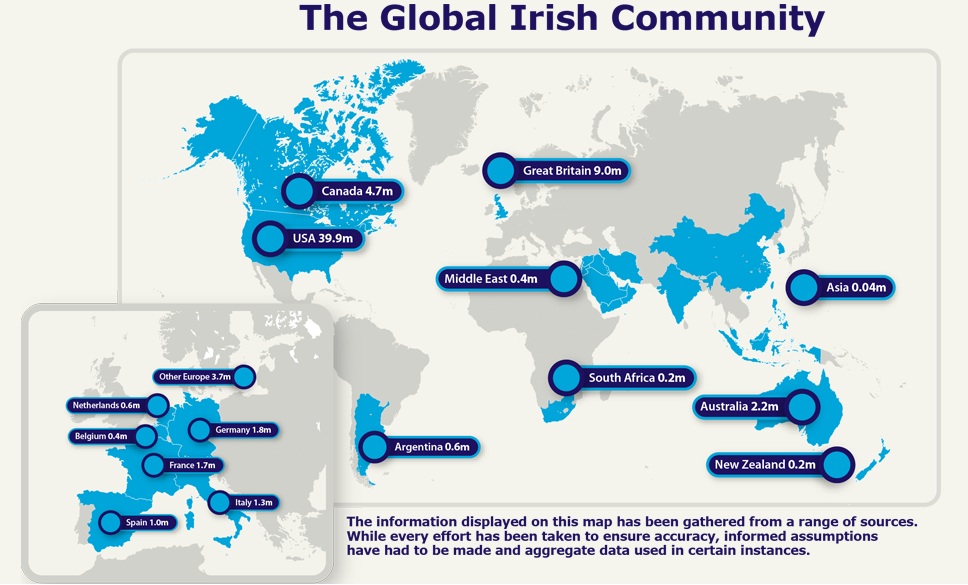 Obviously, these aren’t questions that can wholly be answered to satisfy everyone in this day and age (and with intercontinental travel so convenient). Was Yeats fully Irish, or “Irish enough”? What are people saying about the Irish diaspora these days, and what “being Irish” means, both to Ireland-born citizens, to the people who left, and their descendants? Can descendants of Irish emigrants lay claim to Ireland as mother country?

I’ll admit, I’m biased. My father’s father was born in County Tipperary, Ireland (up until his generation, we were O’Ryans), and throughout my childhood, I was told that we were Irish, and to be Irish is to be proud of being Irish. My aunts and uncles on my father’s side, and my parents instilled in me from a young age that Ireland was home too, and though we didn’t have the money to take trips there or to visit extended family there, Ireland was important to us. I come from a line of strict Irish Catholics– we eat corned beef and cabbage routinely, and always on New Year’s. While I was abroad in Europe, I took an extended weekend trip to Ireland and my entire family was ridiculously excited, offering to send me money, and sharing trip advice. And the trip itself was unbelievably important for me, too, in ways I didn’t understand until I got there. Though I’d never been there before, I won’t lie: I felt like I was home. (And it didn’t hurt that when I visited Galway that Saturday, a street vendor guessed my last name when I told him where my grandfather was from. “You must be a Ryan,” he had said. WHAT A FEELING.)

So my quest is personal, in some ways: although I’m not an Irish citizen, and I’m certainly an American, a part of me does want to believe I am Irish, even just a little bit. And I know that true (“true”) Irish people get frustrated when they hear others with Irish heritage claim Ireland as “their roots” or “their country.” I understand the term plastic paddy, and I worry about that term if I assert my/my father’s/my grandfather’s claim to Irish identity. I don’t have a way to resolve that conflict of self-identification, but that doesn’t seem to be an uncommon problem among diasporas.

What I’ve done here is collect some responses I’ve found surrounding this issue of identity and authenticity: what it means to be a member of the Irish diaspora (if I can even call myself that, or if that’s just my father/grandfather’s community), what Ireland has to say about it, and what people of the Internet want “being Irish” to mean.

Irish Times post, Plan for National Diaspora Centre Announced: This is a (very!) recent article from the Irish Times (literally published today, sparking this post), which is announcing the future building of a National Diaspora Centre somewhere in Ireland, which will serve as a museum celebrating the achievements of the Irish people who emigrated through the centuries.

At least for me, this article seems to be a more formal acceptance of the Irish Diaspora as a part of Ireland’s identity (though not necessarily in the same way as true Irish citizens/people living in Ireland). Could this be a happy medium? Regardless, the Centre will be a tourist site, and is a fantastic idea to market Ireland as a country that has contributed a lot, even when the Irish “stop being Irish.”

Pro Genealogists’ post (Ancestry.com), A Saint Patrick’s Day Reflection:  What Does it Mean to be “Irish”?: “In my view “Irish” means simply ‘from the island of Ireland.’ And I would urge all to respect the very complex history of Ireland and the many cultural experiences and political viewpoints of the Irish people.”

This article, which focuses on genealogy, explains that it’s not just a matter of “Irish means Catholic, Irish means anti-British, Irish means not from Northern Ireland.” We can’t understand what truly happened, historically, and so we have to tread lightly in characterizing an entire nation. Of course this is true, but it appears that the author takes a very exclusive route to understanding Irish identity: it is Ireland, and Ireland alone, that determines its identity, and outsiders (North Americans, the article states explicitly) should watch and not participate.

College Humor: The Trouble with Being Irish: “We share everything we have; like St. Patty’s day” you can party that day too.”

A humorous take on what it means, to this author, to be Irish. The author was (I assume?) born in Ireland, but is not “pure bred” Irish (i.e. has ancestors who are German, British, French, etc.), and although some people are appalled (?), he still calls himself “mostly Irish.” So being Irish, to him, is not ‘what culture you were born into,’ it is the culture of the majority of your heritage.

K-Blog: What Does It Mean to Be Irish?: A personal, poetic account of what being Irish means, to the author, who is no longer living in Ireland. Not the most brilliant post, but the author implies that being Irish means creativity, and connectedness with Irish artists who helped to make the country what it is through their craft.

Gaelic Matters.com: What Being Irish Means To You: A post on the Twitter hashtag #beingirishmeans contest, which was run by Irish Times.

Some of my favorites:

#beingirishmeans knowing all the words to Fairytale of NY, never knowing a stranger (aren’t any), and not forgetting the green of Ireland

Because it was a contest, there was one winning hashtag, which was this: #beingirishmeans emigrating because the country’s in tatters, and telling the world how much you miss it – Julia Cashman

A Quote, by Alexander McCall Smith, from Portuguese Irregular Verbs: “He had been thinking of how landscape moulds a language. It was impossible to imagine these hills giving forth anything but the soft syllables of Irish, just as only certain forms of German could be spoken on the high crags of Europe; or Dutch in the muddy, guttural, phlegmish lowlands.”

The next article is my final one, and my favorite, so I’ll just leave you all with a quote from the post. It’s written by an Irish citizen, who traveled to America and who changed his perspective on what it means to be Irish based on the love for his home country that he found here. I don’t think this approach to Irish identity is the only one that works, and I think it’s entirely valid that more authentically Irish people would take issue with appropriation when they see it, in many forms. But I feel welcomed at times and connected to my Irish heritage, and I can’t spend my life feeling guilty for what I feel. I may not be as Emerald as true Irishmen, but I know at least that I’m some shade of green.

I also think this comment section is particularly interesting, as it’s on the whole pretty respectful and informative. If you get a chance to read nothing else, read this one.

“So what does it mean to say “I’m Irish”? It’s so often said by people who were not born in Ireland, or have never even been to Ireland. So when these people say “I’m Irish” what exactly do they mean? One person said “My heart is Irish and that’s what’s important to me” another noted that for her it was “a state of mind” and others indicated that to have Irish heritage was to be, Irish…

These days, I fall in line with some of those Irish-born Facebook commenter’s who say things like “to see these people’s eyes light up when you talk to them of places they have only heard or read about, it’s a joy to behold” and with the ones who say “I’m just glad they love my country”. It makes me proud that so many people want to be connected with Ireland.”