“Opening the Gododdin again and renewing

My conscious connection with the gwyr y gogledd

I who never fail to detect every now and again,

In the Hebridean and Shetland and Cornish waters I most frequent,

Which has floated invisibly around the seas

Ever since Arfderyd a millennium and a half ago,

(Since Arfderydd –a few miles from where I was born!)

Upon reading “On Reading Professor Ifor Williams’s ‘Canu Aneurin’ in Difficult Days,” I came across Hugh MacDiarmid’s allusion to Myrddin, Arfderyd, and Celyddon. According to the footnote, “After the battle of Arfderydd, Myrddin, sometimes called Myrddin Wyllt or Merlinus Sylvestris, the Merlin of the Arthurian romance, fled to the Caledonian forest and finally escaped with his paramour, Chwimleian (Vivien), in a ship of glass.” I had never heard this story of Merlin before, so I decided to do some research on it.

I first expected Myrddin and Merlin to be two different versions of the name for the same character. Instead, I discovered that the character/person of Myrddin came before Geoffrey of Monmouth’s introduction of Merlin in Prophetiae Merlini, Historia Regum Britanniae, and Vita Merlini. Prophetiae is a collection of prophecies attributed to Myrddin (who Geoffrey called Merlin). Historia Regum Britanniae included a newly constructed version of Merlin’s life, while Geoffrey’s later Vita Merlini stayed truer to the original Welsh stories of Myrddin and his experience at Arfderydd, but this version was not as popular as his first Arthurian account.

Myrddin was a bard in medieval Welsh legend who was born around 540 CE. He also seemed to have a twin sister by the name of Gwendydd (or Gwenddydd or Languoreth).

But even Myrddin was not an original character. His history can be traced back to similar character named Lailoken who was said to be a mad man who roamed the Caledonian Forest in the late 6th ccentury in what is now southern Scotland. Myrddin has similar characteristics. According to Annales Cambriae (which is a 12th century copy of a mid-10th century original that covered events in Wales, Ireland, Cornall, England, Scotland, and farther), in 573 CE, the Battle of Arfderydd took place in Arthuret (just over the modern in modern Scotland). The battle was between the men of King Gwenddoleu and those of Gwrgi and Peredur or King Riderch. Myrddin was on Gwenddoleu’s side, which ultimately lost. Along the way, he lost his nephew and Gwenddoleu was also killed. After the battle and based on what he had seen, Myrddin went mad and ran away to Coed Celyddon, the Forest of Celyddon. 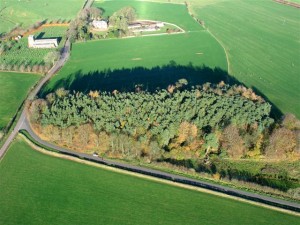 While in the forest, he developed a gift for prophecy and would eventually foretell his own threefold death by falling, stabbing, and drowning. Other interesting prophecies are attributed to him, such as “Woe to the Red Dragon, for his banishment hastens on. His lurking holes shall be seized by the White Dragon, which signified Saxons whom you (Vortigern) invited over; but the Red denotes the British nation, which shall be oppressed by the White. Therefore shall its mountains be leveled as the valleys and the rivers of the valleys shall run with blood” and “There shall be a miserable desolation of the kingdom, and the threshing floors shall become again forests. The White Dragon shall rise again, and invite over a daughter of Germany. Our gardens shall again be replenished with foreign seed and the Red Dragon shall pine away at the end of the pool.”

Chwimleian, who is said to have inspired the character of Vivien in later Arthurian legends. She is mentioned in two poems in Llyfr Du Caerfyrddin (The Black Book of Carmathen): Afallenau Myrddin (Myrddin’s Orchards) and Oianau Myrddin (Myrddin’s Exclamations), both of which are narrated by Myrddin. She seems to be some kind of augur or prophetess, but it can also be argued that she is an extension of Myrddin himself. Her name comes from shwyfleian, which means “a pale, wild traveler,” which is also an accurate description of Myrddin.

In my research of specifically Myrddin, however, I was unable to find a story about “a ship of glass.” Instead, I had to look into the later legends of Merlin. The only word-for-word “ship of glass” that I was able to find was in “The Death of Merlin,” written by Ernest Rhys in 1898:

Marvellous Merlin is wafted away

In a sailing island, a ship of glass;

For over the edge of the world he’s blown

“She took the helm and he the sail; the boat
Drave with a sudden wind across the deeps…” — from Tennyson’s “Vivien” idyll

There are multiple versions of the story of Merlin’s death (or downfall). Generally, the Arthurian story goes that Merlin fell in love with Vivien and taught her his ways of magic. She eventually became more powerful than even him and she imprisoned him to keep him from trying to control her. She traps him in a glass castle/tower (and sometimes it can be translated to a glass ship) where he cannot ever escape (and depending on the version of the story, he remains there forever or eventually dies, but is reborn). This glass prison is also invisible to all others, so Merlin can never be found. This tale of his end is very different from the Myrddin legend of the bard’s threefold death.

Though these stories range from Welsh to Scottish to English, they are all enveloped under the Celtic tradition and have had effects on each other.