I suppose I’ll follow suit and begin this post with a quick introduction.  I’m an English major, though I haven’t officially declared it yet.  I love poetry, which is a big reason for why I’m in this class.  I was raised on trashy sci-fi novels and I’m a big fan of their bad movie equivalents on the scyfy channel.  On top of that, I really just like the feeling of a good pen.  I want to think a little bit about the sword in “Meditations in Time of Civil War” and Yeats’ portrayal of history, so I’ll preface it with one further point, which is that I love the simple thought of history itself, how we interact with and transform it.

As an emblem for art, the sword seems to be a very deliberate choice.  Yeats sets it up as an icon of the heroic past which some Japanese man, despite his “country’s talk/for silken clothes and a stately walk,” had the good sense to preserve during the wave of industrialization that swept through Japan.  So is W.B. Yeats some kind of Irish Tom Cruise fighting for the samurai (or the Irish equivalent) and their glorious heritage?  What does it mean, after all, that at a time of horrific violence and civil war Yeats chooses an object whose own personal history is steeped in the bloodshed and feudal warfare of medieval Japan?  Certainly, such swords are beautiful works of art but at the time of their creation, I would be curious to know how they were understood.  Though they may have been prized possessions and family heirlooms, they were also manufactured instruments made with a specific purpose.

I’m unsure at this point (and I would welcome anyone else’s thoughts) but it seems that by describing the sword as “changeless” Yeats initially casts it as an immortal artifact, an object that stands outside of time and thus represents the past in its purest form, unmediated by history.  After likening it to the moon, however, and pointing out the moon’s transformative cycle—“if no change appears/No moon”—it seems that Yeats is suggesting the sword is in fact just as transitory; “only an aching heart” would conceive of a piece of art as changeless.  Similarly the soul only “look[s]” unchanging.  If history is not just a study of the past but a way in which the present is transformed into the past, then nothing, not the sword, art, nor the immortal soul, can escape history and hold off change.  On one level, the sword, which appears to be a timeless work of art, has already been transformed from a weapon into art.

This could be Yeats reflecting on his own aching heart.  He believed in an Irish heritage, large family houses passed down through generations, the preservation of the language, and he was fascinated by Irish folklore and myth.  Perhaps in this period of cultural upheaval he knew that heritage could survive unchanged.  On the other hand, I think he knew it would endure in some form.  Though the moon moves through its cycles it is a constant and familiar presence and has been before there were even people to bother talking about how poetic it was.

I really just wanted to post this photo of De Valera, in which he looks rather surprisingly like the divine Alan Rickman. 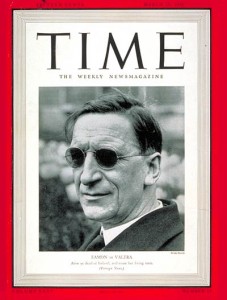 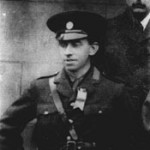 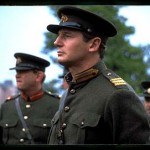 In keeping with Professor McInerney’s post, I wanted to briefly introduce myself before diving into the actual subject of this blog post – the differences between the poetic self-portrayals of Thomas MacDonagh and the cinematic portrayal of Michael Collins. Quite simply, I am an English major with a variety of decidedly non-literary interests—including sustainable agriculture, French culture, global macroeconomics, and, most important of all, that never-ending pursuit of fine meals and excellent conversation—that I hope to bring to this blog. I look forward to seeing everyone else draw their on outside interests, as well, to spice up this electronic dialogue, all the while avoiding the dull response-counter-response style often seen on Blackboard. But, enough about me; let’s move onto the main focus of this blog post.

As I alluded to above, I would like to make a quick cross-comparison of the poetry written by one of the authors (pun intended) of the 1916 Easter Rising and the film we watched today, Michael Collins. In reading the work of Thomas MacDonagh, in particular, I noticed an explicit thread of isolation in his poetic self-portrayal. (That is, of course, assuming that we are disregarding New Critical theory and are conflating the dramatic speaker with MacDonagh, the man.) Starting with “Of a Poet Patriot,” the second stanza externalizes the poet’s solitude in stating “His deed was a single word, / Called out *alone* / In a night when no echo stirred / To laughter or moan.” MacDonagh’s revolutionary work, his “eternal [patriotic] song,” reverberates in the quiet, unhearing darkness of the night when no sign of human existence, not even a “laugh[]” “moan,” betrays the presence of another. Likewise, in the poem “In Paris,” the second stanza once again posits the speaker as separate from others. Crying out “I speak to no one from sun to sun, / And do my *single* will, / Though round me loud voiced *millions* run / And life is never still.,” the speaker betrays his separation from the multitudes that exist around him and alludes to the solitude of his revolutionary work. Put together, then, elements of both poems point towards loneliness, solitude, and/or privacy that pervaded the life of MacDonagh and, perhaps, that of the revolutionary in general.

Maybe not. As compared to the decidedly isolated sentiment one feels in reading MacDonagh’s poems, Neil Jordan’s Michael Collins portrays the acting leader of the IRA as a brash and genial war hero. Moving from his early years as a participant in the 1916 Easter Rising to his assassination in August of 1922, Collins never seems to be without companionship. Besides his stunning (although inauthentic) Irish lass, Julia Roberts, “Mick” finds himself surrounded by his militant “boys,” his longtime friend Henry Boland, and, even on the night before he perishes, his countrymen of West Cork. In short, he is a socialite, a wartime Irish rockstar who riles the masses enough to overthrow the most powerful empire in the world.

In juxtaposition,  MacDonagh’s revolutionary verse and Jordan’s Michael Collins present two vastly different (and equally fictional) portrayals of the life of an Irish revolutionary. Why do the differ so? Perhaps that is an answer to be sought by another sailor on this curiously Celtic course upon which we have all embarked.

Welcome to the blog of English 390, The Celtic Fringe.  There are no hard and fast rules about how to use this space, rather just a series of suggestions.  Use it to reflect upon what you’ve been reading for class; use it to post responses to films; use it to explore any subject related to the course (and please feel free to interpret this last suggestion as broadly as you please).

I’ll begin  the game with a few thoughts about how I came to want to teach this course, because it’s not as obvious as you might think.  Yes, my last name is Irish (it means “son of the Church steward” which is rather provocative, really), but I didn’t acquire that name until I was 28, by which time I’d already visited Ireland three times and learned as much Irish as I was ever going to.  So it’s not exactly in my blood. As the Irish like to say, there are two kinds of people in this world: the Irish, and those who wish they were.  I’m the latter.  Oh, I have a dash of Welsh somewhere way back, and a dash of Scottish, in my very mixed Northern European ancestry, but why should either be more dominant than the dash of Cherokee, which is actually a few generations closer?  The answer has nothing to do with ethnicity, actually, and everything to do with reading:  the Prydein Chronicles of Lloyd Alexander and Robert Lewis Stevenson’s Kidnapped when I was very young, then Yeats and Dylan Thomas when I was an adolescent.  And then, when I was a first year student at University, I enrolled, very much on a whim (because it sounded so peculiar and intriguing!) in a year-long course called “An Introduction to Modern Irish”, taught by an elderly Jesuit named Professor Sheridan.

To be perfectly honest, it was a dreadful course.  Father Sheridan was about 80 and had been teaching at St. Mike’s (a Catholic college affiliated with the University of Toronto) for a very long time, but he’d been teaching Latin.  It hadn’t really ever occurred to him that teaching a living language would be different from teaching a dead language, nor that teaching your cradle tongue would be very different from teaching a language you had yourself been taught. He was kind enough, but baffled by our bewilderment at the curiosities of Irish.  He expected us simply to learn the differences between long and short vowels, broad and slender consonants, aspiration and lenition (don’t ask!) and apply them accordingly.  One day, however,  someone asked him how you would answer the telephone in Irish. The student felt that the traditional Irish greeting, which we’d been taught was the equivalent of “hello”, “Dia dhuit!” (literally, God be with you), was too long, too formal, and too hard to pronounce.  Father Sheridan was dumbfounded.  There was a long silence, and then he explained that when he was growing up in Connemara, speaking only Irish, before he went away to school and then to Rome and finally to Toronto, there was only one telephone in the whole town, in the doctor’s surgery; he had never “spoken into it” or indeed into any telephone in Ireland, and had no idea how it might have been answered, either then or now.

I think I got a B+ in the class;  I didn’t learn very much Irish, decided to major in Classics, and never saw Father Sheridan again (he retired the following year). What stuck in my mind, though, was the echo of Father Sheridan’s absolutely unadulterated accent, and the image of a world in which the telephone was such a rarity that no one knew how to answer it.  This is perhaps the worst kind of patronizing nostalgia (for perfect, “unspoilt”, semi-literate, pre-mechanized and  pre-Modern society), and indeed that Ireland was long gone by the time I actually got there, the summer after my senior year– but that’s how it started.  That and reading a lot more Yeats, the only Irish poet I really knew for quite a  few years.