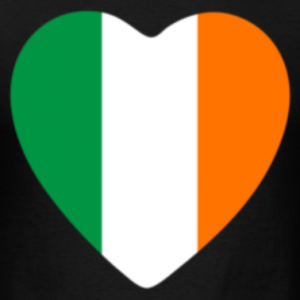 As a response to today’s holiday, I thought it would be interesting to talk about Irish customs surrounding Valentine’s Day, love, and marriage. In fact, it is especially interesting that St. Valentine has a much closer relationship to the Irish than I had realized. In the mid-nineteenth century, Pope Gregory XVI sent a small gilded casket of the ashes of a famous Christian martyr to Whitefriar Carmelite Church in Dublin in recognition of the church’s preacher, Father John Spratt. The ashes were actually the remains of St. Valentine, exhumed from his burial spot in Rome. This gift has made Ireland an integral part of the celebration of Valentine’s Day for historians, religious women and men, and lovers. In fact, the gift has completely transformed the function of Whitefriar church, for it holds huge Valentine’s Day ceremonies honoring the ashes, bestowing Irish luck upon young lovers, and even selling Valentine’s Day cards. There is also a formal Blessing of Rings for all engaged couples.

Below are some other traditions and customs:

The Trysting Stone: In the early years of a more pagan Ireland, before there were churches, a large part (literally) of the wedding ceremony was the Trysting Stone (Cloch na Gealluna). The Trysting Stone is a large rock with a hole carved in the center. The couple would unite hands through the hole, which is supposed to bring luck to the couple. This ritual was especially important to arranged marriages. Click here to read a poem by David Ross Lietch about Trysting Stones, which gives a bit of perspective about the culture around them.

Shrovetide Even into the middle of the twentieth century, many Irish were following the rules of Shrovetide. It was believed that there was a short period of time in which couples could marry- anywhere from January 6th to Lent. Because marriage was not permissible during or after Lent, it was important to get married before Ash Wednesday. Shrove Tuesday, the day before Ash Wednesday, was the most popular wedding day. If you were of age, but not engaged by Shrovetide, you were considered to have failed the community, and were given one last chance to marry, “going to the Skelligs.” While historians call this mere myth, it was believed that the islands of the Skelligs were two weeks behind the time of mainland Ireland because of the time preferences of the monks that lived in the Skellig Monastery. It was important to “not miss the boat” to the Skelligs (one of the origins of this slang phrase), for single people at the end of Shrovetide would be sprinkled with salt for preservation until the next year. You better hurry up; Shrove Tuesday is March 8th this year! 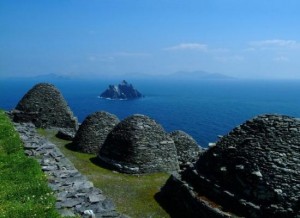 Luck Money At the wedding ceremony, the bride and groom exchange(d) silver coins. If the coins clink, then the couple will be blessed with happy children.

The Magic Hanky A magic hanky is a special handmade handkerchief given by relatives of the bride and groom to wish good luck in the marriage. 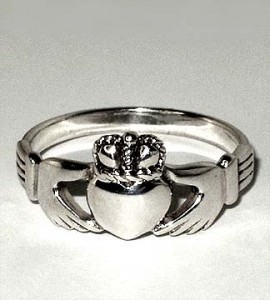 It’s easy to see these rings everywhere today, but it is important to discuss their roots despite their rather touristy attraction these days. In the 16th century, Irishman Richard Joyce’s fishing boat leaving from Claddagh Village was captured by Algerians who sold the entire crew into slavery. Joyce was trained by an Algerian goldsmith who taught him how to make jewelry out of gold. Joyce created a ring made up of two hands holding a crowned heart. The hands symbolize friendship, the heart stands for love and the crown, loyalty. Upon his release, Joyce returned home to Ireland where he found the love he was so cruelly taken from. Her gave her the ring, and they married.