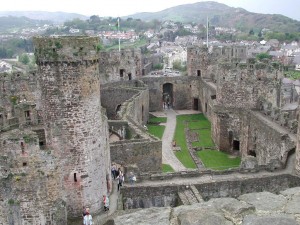 Here’s what I know about the Welsh and the longbow (it’s not really very much). After the Norman Conquest, the Welsh caused the Normans a great deal of trouble by refusing to submit; the parts of England closest to Wales (the “Marches”) were in fairly constant turmoil for several generations, and the Norman lords of those parts (the “Marcher Lords”) were allowed to deal with the pesky Welsh very severely. The preferred weapon of the Welsh (and it’s an ideal weapon for guerilla warfare) was the longbow. Edward I Longshanks is the king credited with finally subduing the Welsh. He built a ring of extraordinary castles around Wales to contain it, presented the Welsh with “a Prince who does not speak a word of English” (his own infant son, who thus became the first English Prince of Wales) and by hiring a great many formidable Welsh archers and making them an elite unit within his army. In fact, many of the archers who made the victories of the Hundred Years’ War were actually Welsh.

In Act IV scene vii of Henry V, Fluellen (Shakespeare gives him a funny Welsh accent) insists that Henry himself is Welsh too:

KING HENRY V
Praised be God, and not our strength, for it!
What is this castle call’d that stands hard by?

MONTJOY
They call it Agincourt.

KING HENRY V
Then call we this the field of Agincourt,
Fought on the day of Crispin Crispianus.

FLUELLEN
Your grandfather of famous memory, an’t please your
majesty, and your great-uncle Edward the Plack
Prince of Wales, as I have read in the chronicles,
fought a most prave pattle here in France.

KING HENRY V
They did, Fluellen.

FLUELLEN
Your majesty says very true: if your majesties is
remembered of it, the Welshmen did good service in a
garden where leeks did grow, wearing leeks in their
Monmouth caps; which, your majesty know, to this
hour is an honourable badge of the service; and I do
believe your majesty takes no scorn to wear the leek
upon Saint Tavy’s day.

KING HENRY V
I wear it for a memorable honour;
For I am Welsh, you know, good countryman.

FLUELLEN
All the water in Wye cannot wash your majesty’s
Welsh plood out of your pody, I can tell you that:
God pless it and preserve it, as long as it pleases
his grace, and his majesty too!

FLUELLEN
By Jeshu, I am your majesty’s countryman, I care not
who know it; I will confess it to all the ‘orld: I
need not to be ashamed of your majesty, praised be
God, so long as your majesty is an honest man.