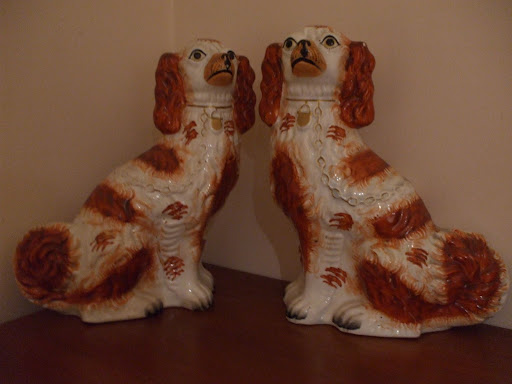 (**Note: I had hoped my mom would send me a picture or two of our own at home by the fireplace, but she told me over the phone that she has no idea how to save and send a picture to me over the Internet after uploading it from her digital camera. My Gran is also away in Scotland right now, so she can’t take any pictures of her googly-eyed Wally Dugs and might not know how to send them to me either. My Papa, who is stil at home, might not even know how to use a digital camera anway.)

Wally Dugs, or “Staffordshire” Dogs, are currently made by Wemyss out of China but used to be made by Bo’ness Pottery in the 19th and 20th centuries. According to its web site, “Wally” means in the Scottish dialect “made out of china.” As I said in class, they typically sit on or near the fireplace and are almost always in pairs.

My mom received her Wally Dugs from my grandmother’s friend after she passed away. My mom thinks she bought them off of Ebay and are quite old.

“They looked terrible as they were badly in need of a bath wich I gave them as soon as I got themhome to America. We call them Tully and Buddy because we got them inTullibody. Marilyn [my gran’s friend who had passed away] paid $250 on the internet for hers .Mine cost zero. When I was little almost everyone had a set on the fireplace.By the way Aunt Betty is now 87 so I guess the dogs are a good.”

When I am home for Easter, I will try to capture our Wally Dugs on camera to share with you all!