I don’t think anyone is “naturally” xenophobic, but I think that all of us (i.e. human beings) are conditioned by society to some degree of xenophobia. I would agree with Andrew’s suggestion that Ireland is particularly xenophobic, however. As Joyce might put it, “It seems history is to blame.” For a very long time, Ireland was an extremely homogeneous country. Before 1922, there was one extremely significant divide, between British and Irish. British propaganda of the 19th century “othered” the Irish along racial lines; Noel Ignatiev’s (somewhat controversial) book How the Irish Became White documents this and argues that Irish immigrants to the United States collectively established themselves as “white” rather than “not white” by participating, often very actively, in the oppression of African Americans.

After Independance, the Republic of Ireland became even more homogeneous–virtually everyone was Irish and Catholic. My bet is that if we could look in on Bloom in the late 20s, say (at which point he’d be in his sixties) we’d find him suffering even more explicit forms of anti-Semitism than he does in 1904, when Ulysses is set. Through much of the twentieth century, Ireland’s economy was stagnant. The Irish emigrated, but very few foreigners immigrated. Even tourism was slow to develop, and such as it was it was mostly the descendants of Irish immigrants to Australia, Canada and the US who visited the country and could, to some extent, be accepted as a version of “us.” I was often told, when I first traveled in Ireland, that I must be part Irish (which I’m not). It simply wasn’t conceivable that I’d be wasting my time visiting “this shitebox country” to quote a guy I met in a pub in Cork if I wasn’t. I eventually invented an Irish great-grandmother (name of Murphy) to facilitate such conversations.

Inevitably, some people did move to Ireland and open businesses, initially often restaurants (like the Chinese one in Mahon’s poem, or the occasional Indian restaurant in Dublin). But most Irish people throughout the 20th century had very little contact with the non-Irish, compared to other Northern Europeans, let alone those of us from the New World with its metaphors of mosaics (Canada) and melting-pots (U.S.). Ignorance, of course, is a prerequisite to all kinds of phobias.

When the Irish economy took off in the early 90s, all of this changed; suddenly, instead of poor Irish people migrating to Europe or North America in search of work, poor people from all over the place, from Poland to Nigeria, started to come to Ireland. Dublin in particular had demographic changes so swift that they were almost impossible to measure. Eastern Europeans came to work in the construction industry, Africans came to open market stalls, Dublin was suddenly no longer a white and catholic city, but a multicoloured, multicultural city that had difficulty recognizing its new self. 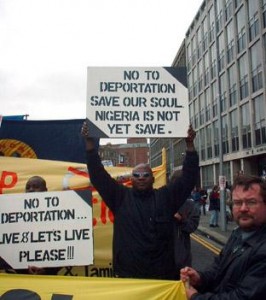 Demonstration against forced deportation of Nigerians living in Dublin.

Of course there has been a backlash; here is a link to an article from the early days of the financial crisis that discusses xenophobia in Ireland, and here is another predicting a rise in racism. And I remember reading somewhere (perhaps in a recent Vanity Fair) about how, in 2009, the parking lot attendants at the Dublin airport suddenly noticed something odd: there was very little outgoing traffic from their lots. It was a precipitous drop; cars seemed to have entered and never left. And indeed this turned out to be the case. When they looked, they found hundreds of abandoned cars, all registered to Eastern Europeans (mostly Poles) who had lost their jobs and simply cut their losses and headed home. This kind of anecdote reinforces xenophobia, since it depicts the foreigners who come and then depart as mercenary, or possibly even rats leaving a sinking ship.  The “real” Irish are the ones who have no place to go (except, of course, Canada, Australia, the U.S.). In recent years, there have been forced deportations of Eastern Europeans (Romanians, Moldovans) and also of Nigerians (some of whom are seeking political asylum). 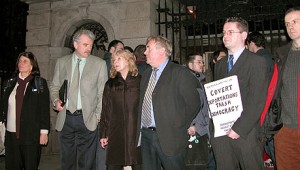 Protest in front of the Dail against deportations.

A final irony: Ireland’s National Consultative Committee on Racism and Interculturalism (NCCRI) was closed in 2008 due to budget cuts.

As I began by saying, I believe all cultures are xenophobic to different degrees, and xenophobia tends to flare up when there are pressures of various sorts on a nation (as it did in this country after 9/11, and as it is doing again now in response to the bad economy). It’s also something I’d like to think nations can grow out of– though I have yet to see one that has succeeded completely.