Here is a website where they have an audio clip of Edwin Morgan reading “The Loch Ness Monster’s Song” for all of you who want to know the correct way to read it!

This is perhaps less of a blog post than a blog grumble. There are days when I feel very tired of Southern Pennsylvania and the absurd weather we’re having, and of interminable administrative meetings, and of having to deal with things like dentist’s appointments. So I’m taking a little mental holiday. For ten minutes today I’m going to be on the deserted island of Staffa, in the Inner Hebrides. There will be no one there at all but me and some sea birds. It’s very small, about three and a half kilometers in circumference which means that even in my ten minutes, I can walk quite aways around the island. And it’s the location of Fingal’s Cave, so named after a character in one of James MacPherson’s poems– that sequence that he claimed were actually ancient bardic artifacts but which were really his own work.

If you, too, need ten minutes in the Hebrides, check your email where you will find Mendelssohn’s Hebrides Overture, guaranteed to take you there. 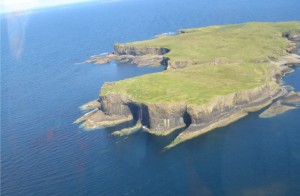 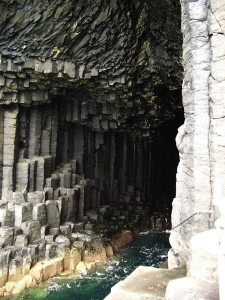 As you all know,  half of us went to see the Pride of Parnell Street last Friday. The production was stunning; both actors handled extremely conflicted characters with ease. I was also happy to see that the themes portrayed intersected so nicely with our course. (There was even a salmon reference – at which I had to catch myself from laughing.)

For those of you who did not see the play, here’s a quick synopsis. Janet and Joe are married happily living on Parnell Street in Dublin. They have two children now; their oldest was killed in an accident, an event which reverberates through the rest of the play. The structure of the play is alternating monologues between Joe and Janet. Janet tells the story of an important (lost) football match, after which half of the men in Dublin went home and beat their wives. Janet leaves and in subsequent monologues tells us about the death of her father, raising her sons alone, a new failed relationship, and a repressed memory of the bombings in Dublin.

Joe tells us of his drug abuse, the crime that sent him to jail, jail itself, procuring a headstone for his dead son, and his eventual contraction of HIV. The two never interact on stage, until the final scene. (A move I am still ambivalent about.) The twin stories tell two tales of Dublin and the Irish themselves. Joe epitomizes the Irish hero, who triumphs, not through victory, but force of will in the face of defeat. In this case, it is his willingness to accept responsibility for beating his wife. Janet, on the other hand, is not the silenced female figure, nor is she a mere stand-in for the Irish Rose. She does, however, become an expanded figure, as she looks around the women’s shelter, and finds her story shared by half the women in Dublin. In the scene where she recalls the car bombing that blasted a commercial district, she also recalls something of herself. She witnesses the forces of Ireland’s internal and external oppression burst forth. In the mess, she witnesses a female shopkeeper preserver in the face of a type of “defeat.” The memory can be read as feminizing the qualities of the national hero.

The play did lots of other really interesting things. It addressed the silent cycles of violence, sexual repression, drug use, disease, and racial concerns that exist in Dublin. At the same time, the language is so specific to the city that for all the criticism, it is also a love song to  diverse and complicated place.

What were some other impressions?

While researching a potential post about Celtic nursery rhymes, I came across a mention of the Mudiad Ysgolion Meithrin, or the “Nursery School Movement” in Wales. A combination of day care and language immersion, the voluntary program was founded in 1971 and has various locations throughout the country. According to its web site, Mudiad Ysgolion Meithrin offers various programs that teach young children, either from birth or 2 years of age, the Welsh language through fun games and interactions. Programs vary by age. I did get the following facts from Wikipedia, but I believe the impact it has had on the language: Over 14,000 children participated in the Nursery in 2,000. As more children participated up until the year 2000, my best guess is that the current number is much higher.

This endeavor is all about making language-learning fun and seems to hold an admirable view on keeping the Welsh language alive, starting with the little ones. The web site itself contains fun yet simple interactive games (such as counting —after about twenty times picking out kites in the bright outdoors, I can now count to three in Welsh!—and links to another web site that has partnered with Mudiad Ysgolion Meithrin to sell colorful books and other learning tools in Welsh. The mascots are a boy named Martyn and his friend Dafydd y Ddafad (Dafydd the Sheep) and include a whole host of supporting characters. Here is the newest addition:

Parents can even benefit from this program, too. Different courses have been developed to include them in the discourse surrounding Welsh and the family. For example, “Pwy Faga Blant?” or, “Who’d Have Children?” includes:

* the importance of play
* how to promote positive behaviour
* the effects of accepting new family circumstances
* general health problems.

This is an admirable effort to keep the language a mainstay in the home and beyond. Children are bi-lingual in a fun yet engaging setting early on and, because of the courses geared toward adults, can have conversation with their parents, too. An article  on the “Worlds of Difference” web site called the Welsh revival said the language is “shaping up to be one of the world’s most impressive linguistic success stories.” It also said that the Nursery School Movement has given its students “a strong foundation in the national language—graduates also do better in English.” Which makes sense—the more languages you know, the better you become at structure and grammar. I am not sure what sort of programs are available for children beyond nursery school age to maintain the language, but  Mudiad Ysgolion Meithrin is still an ambitious and exciting start.

Here is a video from the web site. No one will probably be able to understand anything that is being said, but it is still interesting to listen to!

*PS I tried to actually embed the Youtube video into this post, but after twenty minutes of fiddling with the entry Youtube htmls and watching a couple tutorials, it didn’t work for me. Can anyone help?