While preparing for my presentation on Carol Ann Duffy I did some research about her role as the British Poet Laureate. One of the first things I found out was that during her first year in the position Duffy wrote a poem for David Beckham called “Achilles” after he injured his Achilles tendon and was unable to play in the 2010 FIFA world cup. I quickly became confused as to why such a prestigious sounding role was responsible for writing original verse about soccer stars and decided to delve a little deeper.

According to the official website of the British Monarchy, the role of Poet Laureate is an honor given to someone whose poetry is of national significance. When the post was first created the intention was for the Poet Laureate to write original verse for special occasions such as royal birthdays, anniversaries and events. Now however, the position has taken on a more honorary nature and there is no obligation for the poet to produce work for such occasions. In its current form the Poet Laureate holds their position for ten years with a stipend of 5,750 pounds and may choose if and when to write.

The Poet Laureate is chosen by the Monarch following advice from the Prime Minister. In Duffy’s case Prime Minister Tony Blair recommended her along with a list of other candidates to Queen Elizabeth II who made the final decision. It took ten years on the short list for Duffy to finally be appointed to the role. She was originally passed over in 1999 when Andrew Motion was given the position. It was speculated that she wasn’t chosen because she is not a typical “establishment.” Blair was nervous about how “Middle England” would respond to Duffy being the lesbian daughter of a dedicated unionist. Now that she has been appointed, however, Duffy is the first woman, first openly gay, and first Scottish Poet Laureate. 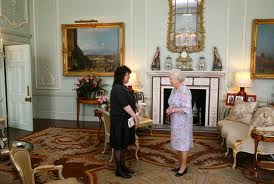 As you can imagine the position has changed significantly since Henry VII appointed the first Poet Laureate in the early 1500’s. Originally poems were written exclusively for royal events, however, Duffy’s list of works demonstrates an increasing diversity in themes. As previously mentioned she has written about David Beckham’s injury but she has also covered LGBT rights events, climate change, the banking crisis and the Icelandic volcanic activity that disrupted air traffic in 2010.

While you probably haven’t heard of most of the past Laureates there are some familiar names on the list including William Wordsworth and Cecil Day-Lewis (Daniel Day-Lewis’ father). 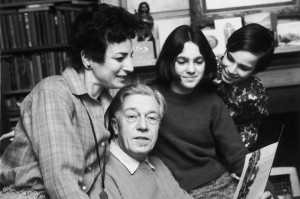 Cecil Day-Lewis with his wife, daughter and son (Daniel)