I may have a problem when it comes to remote Northern islands. Ireland was the first, and when I visited it in the 80s, it still was in many ways remote from the rest of the world. The Celtic Tiger economic boom was still in the future, as were all of the horrible cheap looking holiday homes on the coasts that followed the tiger. It was cheap, the coffee was awful, you could hitchhike all around the country in complete safety and there were no big roads. I still love Ireland, but in the last 25 years, it has become more like the rest of Europe; you can zoom across the country on a four lane highway, and there’s been a lot of unfortunate building. Traditional Irish cottages looked like this, three windows and a door, whitewashed, under a thatched roof: 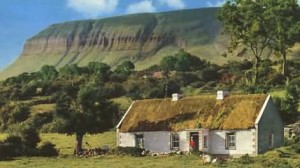 That’s Ben Bulben in the background, by the way, where Yeats roamed as a boy.

Nowadays, if you want to rent a cottage, you’re more likely to find something like this… 5 star and glamorous, according to the ad. 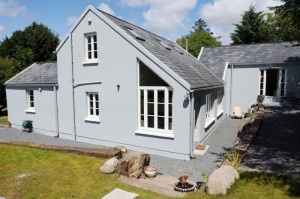 And worse, the collapse of the Celtic Tiger left half finished developments all over the country. Here’s a gallery from HuffPost.

My new obsession is Iceland, which reminds me of Ireland 30 years ago, only with volcanoes. Iceland, curiously, has some claim to being a partially Celtic country. The Irish monks who first settled there before the Vikings arrived in 874 hardly count, because, of course, they left no descendants.

Irish monks sailing to Iceland in a very small boat.

They were just looking for the most remote place imaginable to pray and get closer to their God.

Nor do the early Viking settlers sound very Celtic; they have names like Ingolfur Arnason (there should be an accent on the o in Ingolfur, but this interface won’t let me add it) and Hrafna-Floki Vilgerðarson, Raven-Floki son of Vilgerð, and Unn the Deep Minded, an extraordinary woman who lead her whole family to a new life in Iceland from… Ireland, via Scotland and the Orkney Islands. She was Norse through and through, but plenty of other women who went with the Vikings to Iceland seem not to have been. Recent DNA studies suggest that 63% of Settler women were actually from the British Isles; 80% of Settler men, on the other hand, were Nordic. What does this mean? Well, let’s just say that some of those women were probably given little choice about whom they “married” and where they went. You can read more about the DNA study at the Arni Magnusson Institute for Icelandic studies, where I was lucky enough to spend 6 weeks last Fall. Next up (next summer) the Orkney Islands. I’ll keep you posted. 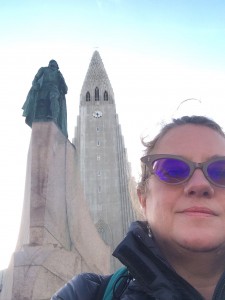 That’s Leif Ericsson behind me, looking towards America.

Because this blog is supposed to allow you to indulge your interests (or obsessions) in a more freeform and creative way than academic papers permit, I don’t want to establish too many rules. Make it fun, make it pretty, that’s about it. Each week 4 people should post, according to the schedule below– if this schedule is inconvenient for you, then trade with someone. All posts should be up by the end of the day on Friday of that week, but here again, I see no need to make a hard deadline.

Posting when you’re supposed to is only part of your job; you should also take the time to respond to other people’s posts– not all of them, but whatever you find interesting or want to add to.

Like any good general, I will go first (this one doesn’t count). 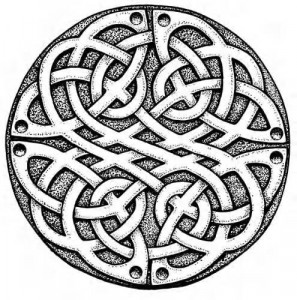