Last time I was in Ireland (summer 2014) I got this cute little Irish harp (known more broadly as a Celtic or Gaelic harp, since indigenous Scottish harps are pretty much the same) necklace: 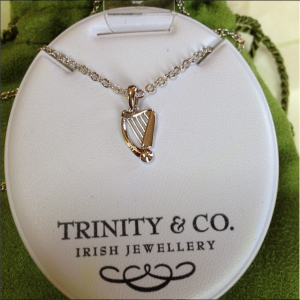 In Irish this instrument is called a cláirseach. The Irish harp is a national symbol of Ireland and appears on the Irish Euro and the Guinness logo. It was also used as a symbol by Irish nationalist organizations, including the Repeal Association and the Irish Republican Brotherhood. A flag showing a gold cláirseach on a green background was flown above Liberty Hall in Dublin on Easter 1916 and was displayed last year at the centennial celebration of the Easter rising. The dude is the President of Ireland, Michael Higgins.

The earliest known possible depictions of harps in Ireland date to the 8th century but we don’t know if those are the type of harp that came to be known as the “Irish harp” or if they’re even harps at all. At the very latest, Irish harps had appeared by the 11th century, as shown by this cute little guy on the Breac Maedoc shrine: 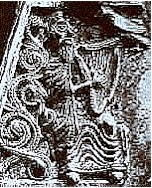 Early harps were made of four pieces of wood held together not by glue but by the tension exerted by the strings on the joints between the pieces of wood. Only three Celtic Harps from the Middle Ages remain. Two of these are Scottish: the Queen Mary Harp (Clàrsach na Banrìgh Màiri) which was allegedly a gift from Mary Stuart, and the Lamont Harp. The third is the Irish 14th or 15th-century Trinity College Harp also known as the “Brian Boru Harp.” A legend has arisen around this harp claiming that after Brian Boru’s death, his son brought the instrument to the Vatican where it remained until a 16th-century pope gave it to Henry VIII. In reality, the harp postdates the death of Brian Boru by about 400 years, but I think the existence of this legend shows that the harp is a powerful symbol of Irishness, if it’s considered worth connecting to one of Ireland’s most famous kings. Made of oak and willow, the Trinity College Harp has been reconstructed at least twice, first because it was falling apart from age, next because it had been taken apart for examination, so it might not look now like it did in 1500. 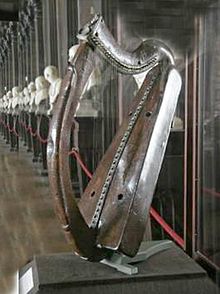 The modern “Irish Harp,” while it looks like the medieval harps, is actually the 19th-century invention of John Egan, though it draws on the ancient Irish harping tradition. Egan took the shape of the medieval Irish harp but altered the instrument with elements of the orchestral harp: gut strings instead of metal strings and, to quote Simon Chadwick, Honorary Secretary of the Historical Harp Society of Ireland, “mechanical semitone-fretting mechanisms.” As I can figure out, that gives you more versatility in terms of the notes you can play.

This summer in my class on Irish mythology, folklore, and music I got to hold and play an Irish harp. I wish I had a picture but it looked something like this: 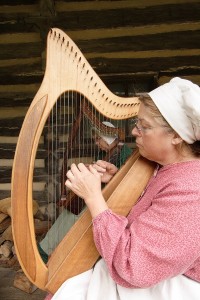 It was the kind you can hold on your lap, not the huge kind that you have to set on the floor. I don’t know how to play the harp but it’s such a cool instrument that all I had to do was touch some strings and it sounded beautiful. At the time, I knew nothing about the long history of Irish harps. If I had, I might have pretended I was the cute little guy on the Breac Maedoc.