The Ballad of Sir Patrick Spens has an interesting place in history. What it roughly covers is the sea voyage of various Scottish nobility to Norway either to collect the 7 year old heir to the Scottish throne Margaret so she could marry Edward I’s son, or to drop off her mother –also named Margaret—to marry the king. With the version I have linked to the first interpretation seems to support the first theory.

The death of the Scottish nobility and Sir Patrick Spens is the main force of the story. The “Maid of Norway” died in the Orkneys and was never married or crowned. 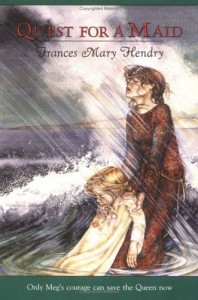 The historical novel Quest for a Maid tells the story from a more feminine perspective—which is probably why my mother chose it as one of our bed time books (The others: Scarlett, Gone with the Wind, Mara Daughter of the Nile and excerpts Nancy Drew all have what could be called a strong female characters.)

Quest for a Maid is one of the few books my family owns that stress our Scottish heritage. My mother’s family has always favored our Irish traditions, we have a lot of Yeats for example but I’d never heard of MacDiarmid. Part of this might be that the Scottish elements of my family don’t tend to give up beef stew recipes never mind anecdotes or memories of cultural heritage.

It’s purely a work of fiction. The Maid of Norway survives a ship wreck and ends up finding true love with a young Scots boy. There’s a freed slave/bondsman and witch trials. Still it’s a really excellent story and I’m happy I read it at that age.

It does do a terrific job also, of expanding the character of Sir Patrick Spens, who occupies an interesting space in the folk ballad.

END_OF_DOCUMENT_TOKEN_TO_BE_REPLACED

After leaving class today I was quite curious about the best way to locate a collection, complete or selected, of Gwyneth Lewis’s poetry. This led me to google where I found a rather interesting article posted in an online journal: Feminine Irony in the Religious Poetry of Gwyneth Lewis. I have mostly skimmed it because, yes, I have a lot of homework to do tonight (and the abstract seems to be written in French)  but it seemed relevant for two reasons.

1. Lewis has published some kind of collected works volume called Chaotic Angels. I’m skeptical of collected volumes because they seem to always leave out the one poem I wanted. I’ve bought three ‘complete’ and ‘collected’ volumes of Edna St. Vincent Millay looking for the one poem I can only find online and in a biography of her. It’s worth the quest but still I’d rather avoid it. Still, Chaotic Angels is probably going to be a lot easier to find on amazon just because it was published more recently.

2. In the opening paragraphs of the essay Szabo refers to an obituary Lewis wrote for R.S. Thomas. I decided I really wanted to read this.

END_OF_DOCUMENT_TOKEN_TO_BE_REPLACED

I’ve spent a lot of the past week watching filmpoems. And really no one is more surprised than I am. In many ways my sense of the poetic is traditional, conservative–stuck in the mud. Once in D.C. with a friend I went to the Corcoran Gallery and saw video art installations. The piece had something to do with footage of water dropping and JFK getting shot. I didn’t really like it. I may have voiced my skepticism at dinner quite freely. So when I was looking for a poet to work on and I ran across a few video-poetry sites I was skeptical.

For me poetry’s power has always been its substantial visual power in the absence of actual physical visual detail. Eavan Boland can write in Anorexia “Caged so/I will grow/ angular and holy” without providing a visual reference. When a film maker provides a line by line reference of Anorexia I find the sudden leap to literalism less interesting and artistic. (which is one of many reasons why the filmpoem Anorexia fails artistically.

Despite some of the worse examples I could drag up I’ve been generally impressed by film poems.  For example there’s a lovely piece for The Stolen Child by Yeats. The video mostly serves simply to provide visual narration that is pretty literal to the poem without being overtly referential. END_OF_DOCUMENT_TOKEN_TO_BE_REPLACED

To talk about this I have to say two things about my mother. The first is that she has political tendencies. Before I was born she worked for various MD/D.C. candidates and up until my older sister was born she went around different Maryland suburbs handing out fliers for elections. The other thing is that she hates driving over bridges.

So to distract herself from the water opening up under us my mother had us sing songs. Inevitably when you come to college you discover that people didn’t listen to the same music growing up. I have friends who were raised on The Beatles or Jim Morrison and I was mostly raised on Irish and Scottish drinking songs—with some Beethoven from my grandmother.