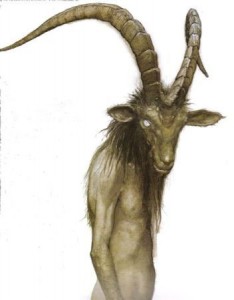 A puca, or Phooka, a particularly unpredictable Unseelie fairy.

Fairies are perhaps the most common supernatural presence in British culture. They’re such a thing that they’ve been categorized and recategorized to such an extent that nobody’s certain quite where the divisions are anymore. I’m going to talk some about the classification of fairies, and then address the interesting way in which they change identity and implication across cultures.

W.B. Yeats, early in his career, wrote a book on the  subject, Irish Fairy and Folktales (which can be read here www.gutenberg.org/files/33887/33887-h/33887-h.htm and listened to here: archive.org/details/FairyAndFolkTalesOfIreland ) in which he divided the mythical race into “Trooping Fairies,” that band together and conduct revelries, and “Solitary Fairies,” who wander, rove, and make mischief alone. What constitutes a fairy is itself doubtful, as the Irish term for supernatural creatures associated with nature, death, or magic–the “Sidhe” (pronounced “SHEE”)–are not necessarily fairies, nor are the Welsh Tylwyth Teg (“TUHL-weeth TEG). These are courtly, otherworldly beings who never quite appear in the same category. What remains constant through most of these eerie ranks, however, is a division (similar to Yeats’s) between adherence to a court-like structure and tendency toward solitary life. The terms for these categories, specifically inherited from Scottish folklore, but widely applicable in concept, are Seelie and Unseelie.

The etymologies are themselves a fascinating story, deriving from the Middle English “seily”, from whence the contemporary “silly”. In this case, like the origin of the word “happy”, it carries denotations of fortunate happenstance and luck, rather than any inherent foolishness. This is because it is considered fortunate to meet a fairy of the Seelie variety, as these, while unbound by human morality, tend to abide by human cultural systems such as courts, contracts, and some sense of exchange. These are the Trooping Fairies that Yeats describes–marching in bands, reveling, sometimes for stately reasons, sometimes sinister ones. It is one of these bands that captured and sought to sacrifice Tam Lin in the classic Scottish ballad.

Unseelie fairies are unlucky–solitary, enigmatic, and often malicious. The Phooka pictured above is an example of such a fairy, and it brings us to our main point about the malleability of fairy identity and implication. For the Phooka (or Puca) of old Ireland is perhaps not a fairy at all, but a folklorized distillation of a more ancient deity. This is a common trend in cultures that move from localized societies into a more regulated nationhood–especially under the pressure of Imperialism. The interesting thing, then, is to see what remains of the original entity, and what elements of its identity have been emphasized depending on the tellers. To take the Phooka as a case study:

The Phooka is consistently depicted as a shapeshifter, able to take the form of horses, dogs, donkeys, birds, or people, depending on its needs. While the folkloric Phooka is generally considered a mischievous creature with frightening, but not dangerous, intentions, its Protean capacities and the uncanny appearance (see above) to which representations often default carry echoes of a darker and more dangerous creature than a mere mischief-maker. It is precisely these lighter aspects that have been emphasized not only by the creature’s place in common lore, but by its heirs of other forms. The word Phooka, after all, emerges from Puca, likely a loan word from the old Norse Puki, meaning “unsettled.” The lineage of the word runs straight down from the Old Norse into Middle and Elizabethan English, emerging, most likely, as Puck, the mischievous (though dangerous) sprite immortalized as the comic center of A Midsummer Night’s Dream. But Puck himself is no light-hearted children’s character, but occasionally betrays a penchant for true and uncanny danger, as when he promises to taunt the Athenian intruders by chasing them in various and impossible forms (a hog, a headless bear, a fire). These are, perhaps, echoes of the darker, deified origins from which so many folkloric fairies emerge. Certainly, Puck has his own English roots, and, as stated above, the etymology is more likely originally Norse than Celtic. But it is telling of the complicated mess of interaction between these cultures how a word can emerge from one, pick up the character of another, and then have that character reshaped by a third. The Old Norse word passed through Ireland at a time of cultural transformation and repression, perhaps picking up an association with an Irish deity on its way toward fragmentation and dissolution. Then, that deity, by that name, is further watered down and tamed when it emerges in the dominant (English) culture. Yet the echoes remain in the darker edges of the figure, and it is this violence and tenacity which somehow, for better or worse, becomes the marker between what is old, in folklore, and what is new.

Fairies, being such common crosscultural currency, are inevitably the allegorical canvas on which much of these palimpsests are laid. There’s much more coherent and interesting stuff here, but people have written whole books on it, like Yeats, and these people: