According to the Wikipedia and Britannica entries, one of the first notable connections between Scotland and Ireland was in the 5th century, when groups of Irish invaded and settled on the west coast of the country, bringing the Gaelic language and Irish cultural influence with them. The Irish only held influence over Scotland for a brief time, however. Irish / Scottish relations began to deteriorate in the 7th century as the Anglo-Saxons expanded from the north of England. Gaelic was still spoken in the Scottish highlands, but variants of Middle English began to influence language in the Scottish lowlands. As the English expanded into Ireland under Tudor rule, Irish influence in Scotland “collapsed almost entirely”. More recently, however, relationships between the two countries have been “rekindled” due in part to their attempts to retain their cultures in the face of overbearing English expansion. The Irish are also the largest minority group currently represented in Scotland.

The issue of culture between the two is interesting, as they both seem to have very similar cultures and traditions that are retained so dramatically by their borders, and that are so very different from English and even Welsh culture. I find it surprising, however, because from the little bit I understand about Scottish history, apart from early Irish invaders, Scotland had more dealings with Romans and Anglo-Saxons, and seems as if it should have been influenced more heavily by those cultures than by the Irish. Celtic culture, for whatever reason (perhaps due to the people that continued to speak Gaelic in the highlands?), caught on and stuck.

The most notable shared aspects of their culture are discussed in this article: ezinearticles.com/?The-Special-Relationship-Between-Ireland-and-Scotland&id=3837879 . Ireland and Scotland are both influenced heavily by Celtic music, and their traditional musics are composed mainly by fiddles, bagpipes, whistles, and bodhrans (a small drum). While it is easy to find compilations of ‘Irish’ or, more broadly, ‘Celtic’ music, it is not very easy to find an album labeled as specifically ‘Scottish’ music. On that note, Irish music has undergone a sort of revival (likely spurred on by Riverdance and Michael Flatley) that definitively Scottish music has not, and modern versions of traditional Irish music supplemented by synthesizers, drums, and electric guitars and violins is very popular.

While I couldn’t find a great deal about specific differences between music between the two countries (although it is often noted that while their music is very similar, Celtic music aficionados say there are marked differences between them), I took Irish dance throughout middle and high school, and can speak a bit on the differences between Irish Step and Scottish Highland dance (there is another type of Scottish dance called Scottish Country dance, but it has more in common with ballroom dancing than Irish Step, and is not exactly considered a “folk dance”).

While there are similar aspects in Scottish Highland and Irish Step dance, a big difference between the two is the hands. Hands are often either on the hips or in the air in Scottish Highland dancing. In Irish dancing, arms are almost always kept at the sides, and only sometimes placed on the hips for certain steps or effect. The exceptions are céilí dancing (group dancing, when you would entwine your arms with other people), and, as the joke goes, Michael Flatley. My dance instructor always used to say that the arms are kept at the sides in Irish dancing because when the English were in control of Ireland and trying to squash out Irish culture, people would keep their arms stiff so that if an English soldier happened to walk by the house and look in the window, he wouldn’t be able to tell that the people inside were dancing, as only their feet were moving. I don’t know how true that actually is, but it sounds plausible to me. 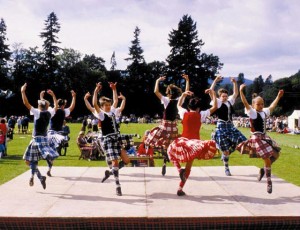 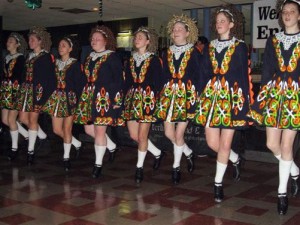 The more traditional or less fancy dress of Irish dance is similar to that of Scottish dance (although Highland dance seems to involve more plaid..). Sometimes Scottish dancers will wear long dresses, however, which Irish dancers never wear–theirs always end around the knee. Schools of Irish dance have their own specific styles of the more traditional dress for beginning students (men wear a pants or a plain kilt, shirts, and sometimes a blazer or sash. I only ever saw a man dancing Irish Step in a kilt once or twice, whereas in Scottish Highland they always wear kilts). When dancers advance to the upper levels in competition, women design their own dress, and men choose their blazer and sash. Solo dresses can be embroidered with Celtic patterns from the Book of Kells or designs of Irish stone crosses, and dancers often secure sashes on the shoulder with brooches designed to look like the Tara Brooch. The really gaudy, sequined solo dresses only started becoming popular in the 70s and 80s. Personally I’m a fan of the more traditional solo dresses with the stitched embroidery rather than the newer ones with the bright patterns, but the traditional dresses are made out of heavier material and a bit more difficult to dance in. 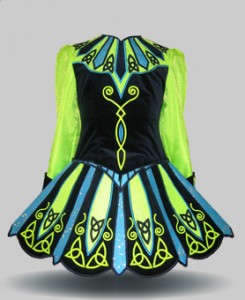 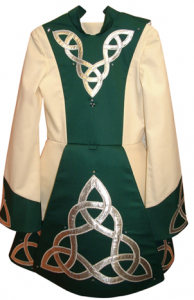 The final main difference is the shoes. The only shoes used in Scottish Highland are ghillies, which are soft shoes that lace across the top and up the ankles and are worn by both men and women. In Irish Step, men wear exclusively hard shoes, and women wear either ghillies or hard shoes, depending on the dance. The hard shoes used in Irish Step have bulky heels and large blocks of wood under the toe used for tapping.

Probably due to Riverdance, Irish Step dance tends to be more well known than Scottish Highland dance. Like Irish music, it has evolved into a very modern version of its traditional self.

A video of the “Highland Fling”, which is one of the three basic dances in Scottish Highland: www.youtube.com/watch?v=k71sHKbnMnQ&feature=related