I was intrigued by Yeats’ multiple references to the hero Cuchulain in our readings. I’ve found that, while the legend of Cuchulain has persisted for many centuries, it originally was part of the ‘Ulster Cycle’ of medieval Irish mythology. The Ulster Cycle is written in Old and Middle Irish, and contains language dating back to the 7th century. The many stories take place in identifiable parts of Ireland; for instance, eastern Ulster and northern Leinster, even specific counties such as Armagh, Down, and Louth. While the stories are set approximately during the 1st century, they have retained cultural importance in part due to their identifiable ties to the land that remains today. Yeats himself, in a preface to a book of retold legends by his friend Lady Gregory in 1902, emphasizes the importance of location:

“We Irish should keep these personages much in our hearts, for they lived in the places where we ride and go marketing, and sometimes they have met one another on the hills that cast their shadows upon our doors at evening… When I was a child I had only to climb the hill behind the house to see long, blue, ragged hills flowing along the southern horizon. What beauty was lost to me, what depth of emotion is still perhaps lacking in me, because nobody told me, not even the merchant captains who knew everything, that Cruachan of the Enchantments lay behind those long, blue, ragged hills!”  – W. B. Yeats 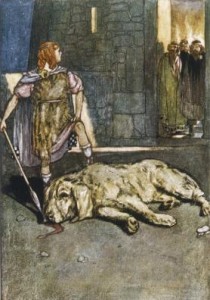 Cuchulain was a mythic Irish hero, son of the god Luch of the Long hand and the mortal Dechtire, and nephew to King Conor of Ulster. His fame as a warrior spread while he was still a child. Along with his formidable strength and skill as a warrior, he was renowned for his beauty and honor. Part of his legend was that the men of Ulster hunted for a wife for Cuchulain in order to keep him from their wives and daughters. Furthermore, one story tells of a test of his honor in which he was willing to submit to his own beheading in order to keep his word. The stories of Cuchulain contain much violence; Cuchulain kills his own son when he mistakes his identity, and the story of Cuchulain’s own death involves the murder of his charioteer, his horse, and the loss of 2 appendages and his head. There is also often the presence of magic in his adventures. While these stories can seem over the top to a modern reader, Yeats celebrated that attribute:

“The abundance of what may seem at first irrelevant invention in a story like the death of Conaire, is essential if we are to recall a time when people were in love with a story, and gave themselves up to imagination as if to a lover.” – W. B. Yeats

Cuchulain is representative of Irish culture. As an Irish hero from Ulster he is significant to both Irish Nationalists and Ulster Unionists. His image is found both as a sculpture in the Dublin General Post Office commemorating the revolutionary Easter Rising of 1916, and contradictorily in a mural on the Newtownards Road meant to depict him as a defender from Irish attack. In modern times, he is also invoked in less political ways! (Marvel Comics.) 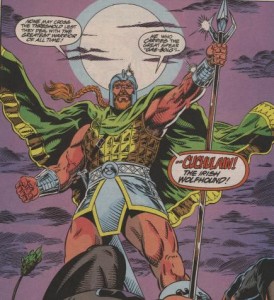