This weekend Bryn Mawr continued one of it’s long standing traditions, May Day.
In Wales, May Day (Calan Mai) is a bit different from the May Day we celebrate at Bryn Mawr. Along with the traditional May Pole dancing, the traditional Welsh Calan Mai included lighting ritual fires that sometimes had animals roasted on them. These fires were, according to the BBC page, traditionally made from nine different types of wood collected by participants on May Day, and are a purification ritual that can be traced to druidical sacrifice to the god Beltane. It seems that these fires are less common today, though if you happen to head up to Edinburgh for May Day, the Beltane Fire Society puts on a rather exuberant Beltane festival on Carlton Hill involving these traditional fires, music, and acts that weave their way through the crowds.
Since the first of May is a liminal time zone in Welsh mythology, Calan Mai also involved divination. This divination usually takes the form of divining one’s true love rather than divining battle outcomes. Hawthorn was also used to decorate the outside of houses ((but never the inside- hawthorn is unlucky, then last thing you would want to be when welcoming in the spring and the fertility of the ground). 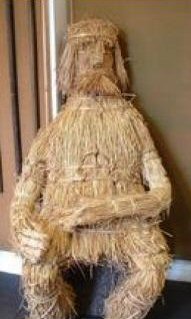 In some areas of Wales, such as Anglesey, straw dolls were made and hung near girl’s homes on May Eve. These dolls were hung by young men whose sweethearts had left them for another man, and often incited jealousies over the lady’s affections that could lead to fights. 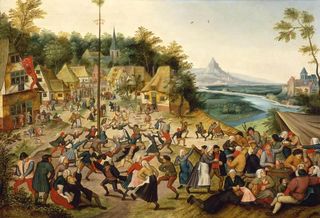 Not all the traditions of Calan Mai are different, however. Like at Bryn Mawr’s May day celebration, dancing around a May pole formed an integral part of the celebrations. The May Pole is traditionally made of birch, though the way in which the dance is performed varies by region. In the South of Wales, the dancing works much the same way it works at Bryn Mawr, with the dancers weaving their ribbons around the pole through their circling dance. 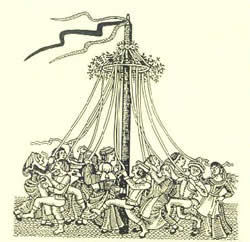 In the north of Wales, however, the may pole ritual is called “Cangen haf”, the summer branch, and requires eighteen young men dressed entirely in white with ribbons attached (rather like the Morris Dancers of May Day look) and two young men to play the Cadi and the Fool. The Cadi carries the “cangen haf” around the town, often decorated with spoons, watches, and other silver borrowed from the people of the village, while the others sing and dance and ask for money from everyone they meet.
Calan Mai also has a May Queen, a young woman who presides over the festival. Traditional Welsh dancing also forms a large part of the festival.
www.youtube.com/watch?v=heNh69zyQZo

Today, amusement park rides and bouncy castles like thoe ones Bryn Mawr set up this Sunday on Merion and Denbigh Greens also tend to make an appearance, especially since May Day is a bank holiday in the UK and most people have the day off to join in the festivities.

And for some fun, here’s a Monty Python sketch on May Day!
www.youtube.com/watch?v=ImQOhSjtlYg