I’ve had an interest in intricate hair styles pretty much since I’ve had hair long enough to braid. After I’d exhausted the books I’d been given on the subject, I turned to other forms of media. The braids in faux medieval fantasy movies where always the best: ridiculous amounts of both braids and hair, pinned and woven in ways which were a struggle to figure out – and a great triumph once I did so. Because of this interest, I decided to research the history of hair keeping and styling among the ancient Celts and then recreate any styles I found described as well as styles which are currently considered “Celtic.”

Generally, the Celts wore their hair long. Soldiers were sometimes an exceptions; they also wore their hair in rounded, bowl cuts. The Celts were usually described as blond, whether naturally or through the use of chalk or lime-water to lighten the hair. Both those substances change the texture of the hair as well, which would allow soldiers to shape their hair into spikes or tufts as a form of intimidation. Upper class men wore both mustaches and beards, which were usually forked or squared, while lower class men wore simply long mustaches, often curled at the ends. Both men and women wore their hair long, often braided or in curls. Women also wore their braids pinned to the head and also incorporated knots and buns in their hairstyles. Decorative pins, golden beads, ribbons, and precious metals and stones were also incorporated, with the materials differing throughout the classes. Both men and women sometime wore bands of cloth or metal across the forehead, and women sometimes wore similar bands across the crown of the head. Combs were made out of bone or horn.

I’ve decided to recreate three hairstyles: one involving a Celtic knot, one described in a primary text, and one with the numerous braids and adornments which characterized ancient decorative Celtic hairstyles. I’ve used modern tools in all but the first one, like bobby pins, corkscrew pins, and hair elastics, but they would all be possible with the Iron Age tools described above, especially for hair more textured than mine.

The first is a recently popular half-back style called a Celtic knot, which is, as far as I can tell, completely unrelated to any actual historic Celtic hairstyles depicted in art or literature. However, the design is reminiscent of traditional, interwoven patterns portrayed in Celtic art, and women were described as wearing their hair knotted. 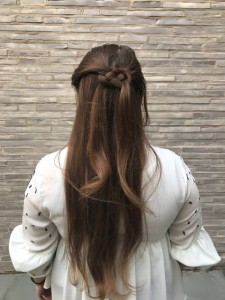 The second is derived from a description of a beautiful woman in the Irish prose epic Táin Bó Cúlaigne. She wears three braids wrapped around her head, with a fourth hanging down her back to her ankles. There is not a description of the configuration of the braids, and obviously my hair doesn’t reach to my ankles, but I’ve taken my best shot.

The third is based on a totally untraceable picture from the internet. Despite my best reverse image searching skills, I couldn’t find the original creator of this style. It’s one of many similar styles which are usually described as Celtic or elven. I apologize for the lighting; the sun went down as I was braiding this one, and I had to take the picture indoors. 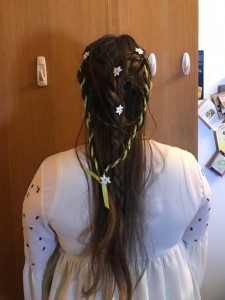 (Please excuse the messiness. I only got one go at this, and some of the braids came out slightly uneven.)

I hope y’all have found this informative and interesting – and maybe even aesthetically pleasing! I really enjoyed the research and the braiding.