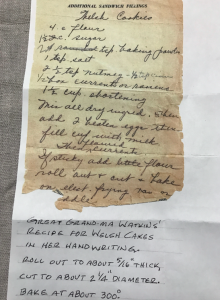 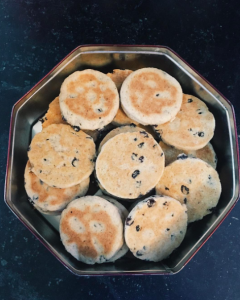 So…here’s my attempt at interpreting my great-grandma Watkins’s beautiful but illegible handwriting. The more readable writing at the bottom of the note is from my grandpa Jim, who inherited this recipe from his mother and makes these bad boys like no one else.

1/2 box of currants or raisins

Mix all dry ingredients. Then, add 2 beaten eggs. Fill cup with milk. Then [flavored? illegible] currants. If sticky, add a little bit of flour. Roll out to about 5/16″ thick; cut to about 2.75″ diameter (in my opinion, the thinner the better, but tastes vary). Fry on electric skillet until golden (don’t bake them! Grandpa Jim was wrong!) at about 300 degrees.

Traditionally, the recipe calls for lard instead of shortening, but my family tries to be a bit more cruelty-free.

What I’ve given you here is basically the standard variety of Welsh cake, but traditional recipes vary based on region. My family originates from the coal fields of Glamorgan and cwm Rhondda, which is in the extreme south of Wales, and there, homemade berry jam is added on top of the cake as a teatime staple!

What I love about the concept of a “Welsh cake” is that, in reality, it’s pretty similar to most griddle cakes made in the U.K., but Welsh people are so insistent that this is a Welsh thing, and literally call it a *Welsh* cake — it’s a pretty wonderful assertion of identity through food.